Memoir of an Unlikely Savior 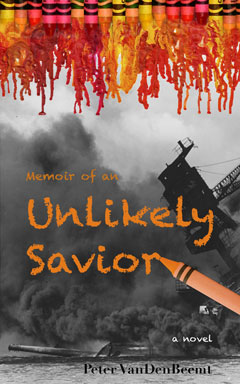 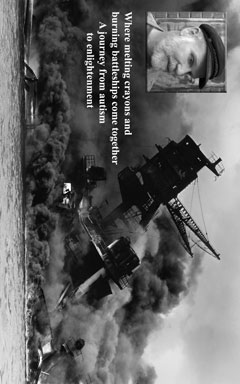 The first chapter begins with the following dream sequence and the first evidence of Frank’s corrosive family ties:

I’m raw naked. Kids are pointing and laughing. The laughter sounds as if it’s coming through a long tube. I don’t have any way to cover myself. The hall stretches for miles. Gray lockers line each side, stands interrupted by gray cast-iron radiators. I can’t find my room and I’m naked in front of everyone.

Between two classrooms I see a door with no window. I pull it open and duck inside. It’s a utility closet. I yank the door closed, burying myself in its darkness. I feel around for a light switch but can’t find one. The spigot in the sink is dripping. The lock clicks. I grab the handle but can’t open the door. I yell for someone to let me out. I start pounding on the door and shouting that I’m locked in, but when I stop to listen I don’t hear a sound. The drips from the spigot are explosions in the silence.

I feel through the darkness for something I can use to pry open the door. I bump things that clatter to the floor. I knock over an uncovered can of something. Thick liquid splashes on the floor and spatters me. Now I’m standing in a sticky puddle. I ignore it. I can’t find anything for prying.

I pound on the door, then listen. I keep doing it over and over. I’m about to pound again when I hear the lock click.

The door opens and Rona is there. Her white dress glows as if the summer sun is a spotlight shining on her. The gossamer cloth clings to her, pushed against her by a light breeze. Her hair has the look of polished mahogany, gold flecks flashing over red-brown grain. Her jade-green eyes are translucent in the brilliance. I want to run to her and have her hold me but I’m naked in front of her. I cringe back into the darkness.

The sun was still above the horizon as we crossed the shoreline already low in our descent. Whitecaps glinted silver along the tawny brown sand. The sea had seen it all and would tell anyone who took the time to listen but we left it behind to reach the land we knew. Still too soon for the twinkle of lights, evening’s gray shroud had just begun to settle.

With just a carry-on I caught the parking-lot shuttle to the bus stop, then the Santa Monica Blue Bus that stopped a few blocks from my street. I picked up an order of pad thai to make up for the airline food I hadn’t eaten and reached home in darkness.

I ate, then showered, then sat in my underwear with the towel over my head while I called Mother and Father. It didn’t matter if the towel muffled their voices. No one was going to say anything of consequence anyway.

“Oh that’s right,” Mother said when I told her I was home. “You were in Hawaii. Did you enjoy it?”

Anytime she asked about my life the question was yes-or-no and that was how she expected me to answer. She didn’t want to be bored by details.

I’d gone hoping I could handle a week of fun-in-the-sun and I enjoyed the glistening teal of the days. But at night the clubs were crowded and loud, a dark muddy brown, and I didn’t know what to say to anybody. When I found myself sitting alone at the bar, my fingers making cat’s cradles without string, I knew it was time to go back to my room. It didn’t matter though. The mystery I’d found at Pearl Harbor had opened up the ageless indigo of World War II.

Father, typically, used what he could for ammunition.

I’d cashed in my credit card miles for a ticket to Hawaii before Jason’s announcement. I’d explained that to Father more than once but his strategy was to ignore what he didn’t want to hear. He’d make his point again in a different way later as if it was a fresh idea, but each time my red got darker like an old barn under the hot summer sun falling deeper into disrepair. I think his record was six. That happened eight years ago when I told him I wanted to move to California.

“Is Jason getting married again?” I asked.

“Don’t play that with me Frank. I know you too well.”

Jason and I were as different as two people could be. He was handsome, slick, and amoral, a tawdry gold. Still, people liked him, even women. He worked at a bank in charge of foreclosures. In keeping with the myth, I thought his name appropriate if you took “fleece” to be a verb.

This was Jason’s third wedding and I’d been to his first two. I promised Father I’d make the fourth.

That night I had the dream. The school in the dream wasn’t the one I was going to for my writing class. With cast-iron radiators and inside halls, it wasn’t a Southern California school at all.

The last chapter begins with another dream sequence, intimating how much Frank has changed over the course of the book:

Rows of gray lockers separated by gray cast-iron radiators line the halls. The classroom doors all have large glass windows. Some of the doors have teachers standing by them. The halls are crowded. Each face I look into appears as a glass shell with a mirrored back. I see a reflection of myself inside each of them.

Each hall has more halls branching off at odd angles. The lights overhead dim and brighten. The occasional window looking to the outside only shows blackness.

I turn a corner and meet Rona. Looking at her, I see myself.

She opens the door and holds it for me then follows me in. When she closes the door the back side of the glass window is reflective. I see myself, a mirrored shell like everyone else. Looking at my reflection in the door is looking into two parallel mirrors reflecting each other. The view reaches to a depth that isn’t there. I feel the awe of what I’m seeing.

Rona goes to the blackboard, picks up a piece of chalk, and writes, “No lock is real. No door is locked.”

Stop by Amazon to “Look Inside” and read the first 50 pages.
You can also read the reviews to see what others have to say.
Then feel free to leave your own.